This page describes three views of the Internet of Things (IOT) on the public cloud. Before enumerating them we make the claim that the story of IOT is really a cloud story… once you get your devices up and running. To put this another way: Deploy your devices, get the data flowing into the cloud, and then the fun begins.

UW ‘smart meters’ connect to an aggregator system called Tritium Niagara. Our objective is to provide fast access to these power consumption and other sensor/actuator data. We are specifically working a single building: Gowan Hall. The update rate is typically five to fifteen minutes with about 70 sensors.

On an AWS account we establish a small SQL Server database instance on the RDS (Relational Database Service). This is blocked from direct internet access by means of a bastion server. The results are updated via a data push originating from Niagara.

The Arduino Maker community is quite large, active and supportive. The Arduino Yun model has both a typical microprocessor as well as a second ‘system on a chp’ processor running Linux with WiFi. The Yun is therefore supported by AWS via an IOT Endpoint. This means that the device can be registered on the AWS cloud. It ‘exists’ there as a virtual extension of itself. The physical device might generate signals or be interested in listening to other devices. The IOT endpoint is a routing destination where this communication takes place using the MPQQ communication protocol.

The objective here is to establish a POC IOT implementation that connects a device located inside a University (UW Seattle) to the AWS cloud; with signals going to and fro. The approach is to obtain and configure such a device and document this initial success for further expansion, for example into a prototype IOT network as part of a research project.

Two Arduino Yun devices are powered up adjacent to one another. Each has a light sensor and a laser diode pointed at the other’s light sensor. State sequence: 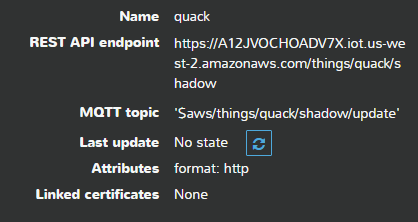